The first patent for a “machine for mowing lawns, etc.” was granted to Edwin Beard Budding from Stroud, Gloucestershire, England, on August 31, 1830. Budding entered into an agreement with John Ferrabee, the owner of Phoenix Foundry at Thrupp Mill, Stroud, to produce the mower.

Reel lawn mowers were produced domestically at least by 1856, many years before the first United States patent for a reel lawn mower was granted to Amariah Hills on January 12, 1868.

What exactly is a reel lawn mower? The reel or cylinder mower, as it is called in England, shears grass in the same way a pair of scissors works. The cutting blades are riveted or welded to a series of spiders, which are located on a central shaft. As the shaft turns, the blades come in contact with the non-moving bed knife to cut the blades of grass.

With the invention of the reel lawn mower, instead of spending many hours using a scythe, sickle, or shears to get an unevenly cut lawn, one could simply and comfortably push a reel lawn mower. The entry of the horse-drawn mower, with its wide reels, allowed estate owners to cut their vast lawns and playing fields more quickly and cheaply.

Even though its popularity dropped precipitously after the Second World War, the reel lawn mower has been here all along. Several hundred thousand hand or push mowers are currently being made with the number increasing yearly as more home owners seek to return to a quieter, greener method of cutting the grass on the smaller plots of urban America.

About James B. Ricci 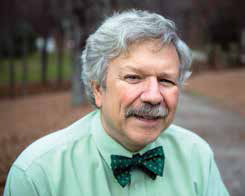 Jim Ricci’s childhood fascination with the Locke Power Lawn Mower led him to collect vintage reel lawn mowers and chronicle the history of the lawn mower industry in his book, Hand, Horse, and Motor: The Development of the Lawn Mower Industry in the United States.

May 15—17, 2020 Cancelled/Postponed due to Covid-19 Virus
The Old Lawnmower Club Annual Rally at the Milton Keynes Museum. Members come from all over the UK (and some, like Jim, from farther afield) to join in the fun.

Jim recommends these small engine shows, at many of which he will display vintage reel mowers:

END_OF_DOCUMENT_TOKEN_TO_BE_REPLACED

“A new chapter has been written on the evolution of the American Lawnmower. A truly amazing reference book which is totally unique, and from the country which pioneered the Automotive industry one could be forgiven for thinking there must be many publications on the subject on the History of Lawn Mowers in the USA, but […]